Moisture Resistance of Tyvek® Is Superior to Medical-Grade Paper 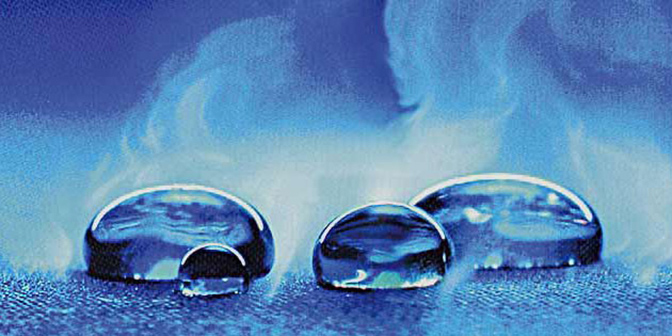 Unlike medical-grade paper, DuPont™ Tyvek® has outstanding moisture resistance. In fact, water in contact with Tyvek® does not wet its surface or spread; it simply remains as droplets on the surface. That’s because Tyvek® is hydrophobic and does not absorb moisture, giving it distinct advantages compared to medical-grade paper.

For example, when medical-grade paper absorbs moisture, its strength and puncture resistance are reduced. This can greatly influence package performance, especially during distribution. In sharp contrast to medical-grade paper, Tyvek® maintains its superior strength both wet and dry.

In addition to its outstanding moisture resistance, another advantage of Tyvek® is that a high moisture vapor transmission rate (MVTR) can be achieved. This is particularly important for the ethylene oxide (EO) sterilization process where water is introduced as a vapor because moisture enhances the effectiveness of EO as a sterilant. Because medical-grade paper absorbs moisture vapor, it does not allow for a high MVTR across the material to the package contents.

Low-temperature oxidative sterilization processes such as hydrogen peroxide gas plasma cannot be used with cellulosic materials such as medical-grade paper because these materials rapidly interact with the oxidizing agent and its superoxide radicals. This can result in an aborted cycle due to inadequate sterilant concentration. Tyvek® is high-density polyethylene (HDPE) and allows for an effective sterilant concentration to be achieved. Although Tyvek® interacts only slightly with these types of sterilants, the surface energy is increased. This can cause a lowering of the hydrostatic head in industrial applications where multiple sterilization cycles are validated. The performance of Tyvek® as a sterile barrier is not affected but the liquid test methods for assessing package integrity (such as dye penetration and water immersion) can produce results that are different from untreated material.

It is important to note that occasionally medical device and pharmaceutical packages are subjected to adverse conditions such as rain on a loading dock or flooding. When this occurs, the time of exposure and severity are not typically known. Because most device manufacturers label their packages as “sterile unless opened or damaged,” we believe water contamination would constitute damage.

Tyvek® has superior hydrostatic head properties compared to medical-grade papers. Hydrostatic head is the measure of the pressure required to force three drops of water through a substrate. The higher the value, the more resistant the package is to water. 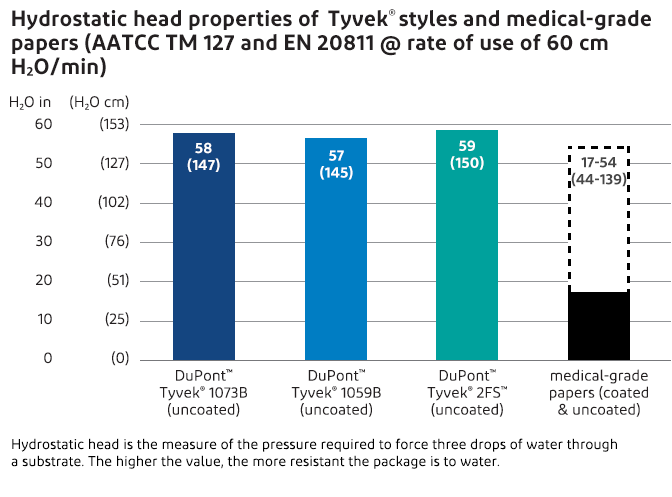